I don’t know if you saw the Monty Python movie “The Holy Grail” or the even better, in my opinion, Broadway Musical version, “Spamalot”?

There is a very funny scene where the cart is going around the houses collecting the dead during, I presume, one of the plagues. They come across a body lying on the street and the dialogue goes like this……

[He walks into the stage, with another man who’s walking with a carriage with dead people on it. From the otherside of the stage comes Lancelot, grabbing Fred’s arm.Fred is lying on the ground and Lancelot is dragging him.]

Lancelot (pointing at Fred): Here’s one.

Lancelot (searching through his pockets for money and handing it to Robin):Nothing. Here’s your nine pence.

Lancelot: Yes he is

Lancelot (to Fred):You’ll be stone dead in a minute.

Robin: I can’t take him like that, it’s against regulations

Fred: I don’t want to go on the cart.

Lancelot (To Fred):Don’t be such a baby!

Robin: I can’t take him!

Lancelot: Well, do us a favour.

Lancelot: Well can’t you hang around a couple of minutes? He won’t be long.

Robin: All right, carry him!

[The man walking the cart walks toward Fred and carrying him to put him on the cart. Robin takes the money from Lancelot.]

Robin: Make it quick. I have to get to Camelot by six.

Lancelot:What, you got a gig?

Lancelot:Well, I’ll come with you!

Fred (From the shoulder of the cart-man):I’m not dead yet.

Lancelot:Shut up! (To Robin) I fancy some of that fighting!

Robin (surprised):Oh? There’s fighting, is there?

Lancelot:Quite a lot, that’s what the job’s all about.

Robin:Oh, I see. It’s not just dressing up and dancing?

Lancelot:I mean, some fights might have a bit of dancing.

Fred (From the top of the cart):I’d like to dance.

Lancelot (turning to Fred, who’s rising and standing): Look, you’re not fooling anyone, you know. 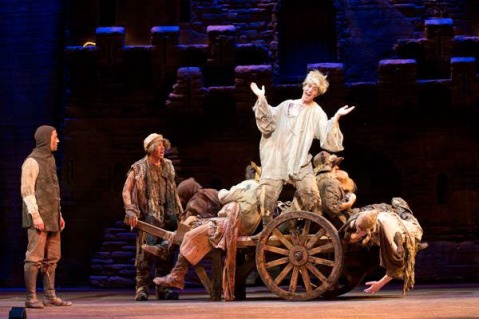 I am not dead yet
No need to go to bed
No need to call the doctor
Cause I’m not yet dead.

Fred is very insistent that he is not dead yet, and he is very vocal about it until Lancelot hits him over the head with a shovel!!!!!!!

The strange thing is that I have had a Fred vocalising his presence in me for a long time and never realised it. He kept on saying “I’m not dead yet, I can dance and I can sing! Look feed me because I have got to live. You need me to live because I have always helped you. Don’t put me on the cart, I’m not dead yet! Remember when you were depressed, we had that way of getting out of it. You have to remember! We are good together! We have always worked things out eventually. I am not dead yet, I can do the Highland Fling!” The only difference with Spamalot’s Fred and my Fred was that mine was actually dead. You see my Fred was what the Bible calls my ‘OLD MAN’ or ‘THE FLESH’! The fact is that our ‘old man” was crucified with Jesus.

“Knowing this, that our old man is crucified with him, that the body of sin might be destroyed, that henceforth we should not serve sin.” (Romans 6:6)

As I have mentioned in previous posts I have suffered severely with mental illness and during the worst times I learnt patterns of survival. The bottom line was that these ways were not God’s ways. they may have worked temporarily but never permanently. In August 2015 I ended up in a local Mental Health Unit where God through Psalm 12 spoke very clearly.

““For the oppression of the poor, for the sighing of the needy, Now I will arise,” says the Lord; “I will set him in the safety for which he yearns.”” (Psalm 12:5 NKJV)

He kept His promise and since then has been doing exactly that; putting me on a foundation of security and safety that will not be moved by anything. It certainly hasn’t all been easy. When God shakes things up in us it can feel quite painful. This is where the ‘old man’ comes in. Even though he had been crucified on the cross I still tried to dig him up and get him to help. I became very fearful of the future.  What would happen if depression came again or if I was rejected by someone. What would happen if I fail again. What if? My life was being filled with a lot of ‘What Ifs?’

The strange part of it all was that I didn’t realise I was doing it. God has been rapid with the work He has been doing and taking away anything that I had been relying on instead of Him. I went through a period of crying. I just couldn’t stop, it went on for days. Not just tears but that gut wrenching kind which really feels like you will break in two with the pain. I have a very close friend who is an amazing intercessor and prophet and she was a great help. I would phone or meet her in church and she would pray and come against the attack of the enemy. It was quite an incredible time. God was working miraculously but I still cried. One day I was walking my dogs and the tears just started flowing, I began to really sob and it wouldn’t stop. I knew I couldn’t get home. I walk my dogs quite close to a local cemetery and so I managed to get there, as I thought it wasn’t such a strange thing to find someone doubled over sobbing near graves!!!!!! I then phoned my friend and through the sobs and snot managed to tell her the story. She paused and said “Do you know what, I think you are grieving for your ‘Old Man’!” I couldn’t believe that I would grieve something that had caused me so many problems, had kept me trapped for so long but she was right. My old patterns had been such a part of my past that I was scared to go into the future without them. In other words I was trapped in shackles of fear! Fear blocks trust! I managed to get home, after my friend prayed over me and declared God’s love for me. (Mobile phones are not so bad after all, are they?) When I was home I had to repent. Repent that I had believed a lie, that I had allowed a dead man to come between me and my Father. Repent that I had forgotten how much I am loved by a wonderful God who would not let anything horrible happen to me.

“Though an army may encamp against me, My heart shall not fear;“ (Psalm 27:3 NKJV)

“Yea, though I walk through the valley of the shadow of death, I will fear no evil; For You are with me; Your rod and Your staff, they comfort me.” (Psalm 23:4 NKJV)

The old man is dead and he can’t dance or sing or do the highland fling. Jesus triumphed over him.

” knowing this, that our old man was crucified with Him, that the body of sin might be done away with, that we should no longer be slaves of sin. 7 For he who has died has been freed from sin.  Now if we died with Christ, we believe that we shall also live with Him,  knowing that Christ, having been raised from the dead, dies no more. Death no longer has dominion over Him.  For the death that He died, He died to sin once for all; but the life that He lives, He lives to God.  Likewise you also, reckon yourselves to be dead indeed to sin, but alive to God in Christ Jesus our Lord.” (Romans 6:6-11 NKJV)

There is only one thing that can take away fear and that is God’s love,

“There is no fear in love; but perfect love casts out fear, because fear involves torment. But he who fears has not been made perfect in love.  We love Him because He first loved us.” (1 John 4:!8-19 NKJV)

It is of no use to just know of His love but we have to experience it. I had to learn to rest in Him and soak in His love, I am still learning to rest in His love but it is becoming slightly easier because I do believe I am unique and loved. God has me in the palm of His hand and His plans for me are for good and not calamity

“For I know the thoughts that I think toward you, says the Lord, thoughts of peace and not of evil, to give you a future and a hope. ” (Jeremiah 29:11 NKJV)

God continually blesses us and the Holy Spirit confirms in us continually how much we mean to God. We must rest in Him. Seek His rest. 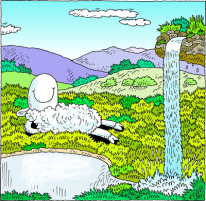 Let Him lead you beside still waters and lay you down in those luscious green pastures. (Psalm23:2) God wants nothing more than to show you that He loves you.

I found the following YouTube clip a fantastic help.  Just sit and let the words flow over you. It is a beautiful Prophetic soaking by Graham Cooke, who is an amazing man of God, Don’t worry about the time, the soaking is on the clip twice but I think you will play it over and over. God loves you so deeply.

View all posts by asonsthoughts